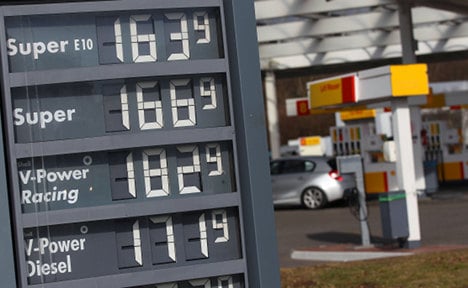 The study, in the Saarbrücker Zeitung on Wednesday, showed drivers paid nearly €100 million into petrol industry profits over three months.

The industry’s explanations for price rises – different currency exchange rates and Middle East political tensions – could not possibly account for the full weight of price increases, the study showed.

Commissioned by the Green parliamentary party, the study concluded that petrol companies increased their profits on the backs of consumers.

Hamburg environmental expert and study author Steffen Bukold examined the relationship between rising petrol prices and the decrease in the value of the euro versus the US dollar.

Worldwide petroleum prices are based on the dollar, so a depreciation of the euro versus the dollar causes prices in Germany to rise. Prices have also risen in recent months due to tensions in the Middle East.

But Bukold found that the price of super petrol in Germany, for example, rose by 11.3 cents per litre over the last three months, but only 6.6 cents of that could be attributed to increased raw materials prices and the exchange rate.

He concluded that petrol companies earned the extra 4.7 cents per litre off the backs of their paying customers. The difference amounts to €98 million in unexplained extra charges, based on a monthly usage of 2.1 billion litres, Bukold said.

The difference was even more dramatic for diesel, he said. The extra charges amounted to 22 cents per litre by last year.

Bukold said the industry’s claim that the record high petrol prices were purely due to higher petrol prices and the weak euro could not be right.

Germany’s cartel office complained last year about the lack of competition in Germany’s petrol market and Bukhold agreed that cartel-like behaviour was one reason behind the price hikes.

With higher petrol prices once would expect that the companies’ margins would drop too, the study said. But the petrol industry “has not only been able to pass on increasing raw materials prices but has also increased its margins.”

Green party politicians called for the cartel office’s powers to be strengthened. Currently the agency did not have enough legal clout “to increase its control and intervene,” the transportation expert for the party, Stephan Kühn, told the paper.

But she said the long-term problem was the finite amount of petrol. “As an economy, we have to as quickly as possible set the framework to become independent from petrol.”