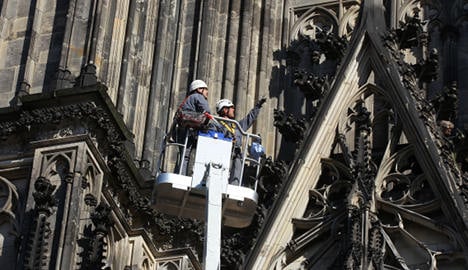 A 50-centimetre chunk of the cathedral fell off from 25 metres above the ground and smashed into smaller pieces when it hit the roof before showering onto people below.

The Kölner Stadt Anzeiger newspaper reported on Tuesday that a homeless man who had been sitting by the cathedral was hit on the head and required brief hospital treatment for cuts.

And although the area was roped off while workers inspected the spot where the piece had broken off, people familiar with the cathedral say bits break off all the time.

Smaller pieces break off all the time, Matthias Demi of the cathedral’s constructions office told the paper, though usually “only in very wet weather or wind.” When there is exceptionally bad weather, such as storms, the cathedral is cordoned off.

“It was very unusual that such a big piece broke off in such good weather,” said the head of the cathedral’s building operations Barbara Schock-Werner. She said she had never seen anything like that in 13 years of working at the cathedral.

After an inspection it was determined that the piece that fell was from the 14th century and dropped off from the cathedral due to wear and tear.

“It could be that the stone already had a crack in it and because of the strong temperature changes between February and March and the crack grew,” Demi told the newspaper.

For now the spot will not be repaired as it would require extra scaffolding and be too big of a job at the moment.