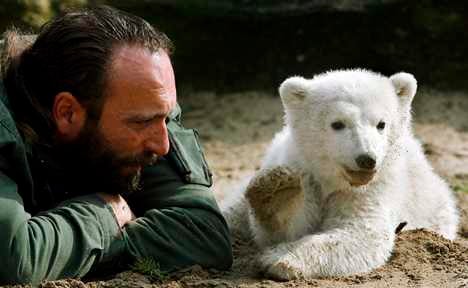 Knut captured the world’s attention after his mother rejected him and he was raised by zookeeper Thomas Dörflein, who died in 2008.

Pictures of the cub being bottle fed went around the world.

Fans already came out en masse last December at what would have been Knut’s fifth birthday. They visited his cage and put flowers in front of it.

“There will surely be a big rush of fans from all over the world,” said Thomas Ziolko, chairman of the Friends of Tierpark Berlin and Zoo Berlin. Ziolko expects the biggest crowds to come on Sunday.

Germans were so taken by Knut and his story that groups like “Knutitis” a fan forum, were formed. Forum administrator Conny Krautwurst said the group’s “mourning will take place in a private sphere.”

These Knut fans say they loved the bear, but they were mostly ridiculed by the public. Krautwurst defended her group, saying “We are not hysterical Knutianer,’” referring to a term meaning Knut followers.

Still, some writings from fans show a deep devotion. One fan, who gave her name as Birgit, wrote, “When I think of the 19th, I get a stomach ache. Last year everything was okay with the world.”

Since the bear died there have been numerous discussions of what the zoo, politicians, and activists did right or wrong concerning the polar bear. Critics said the zoo used the bear for marketing purposes when it should have directed attention to the polar bears’ plight.

Much discussion took place over plans to stuff the bear and display him in the Berlin Natural History Museum. That will happen, museum officials say, but they don’t know when.