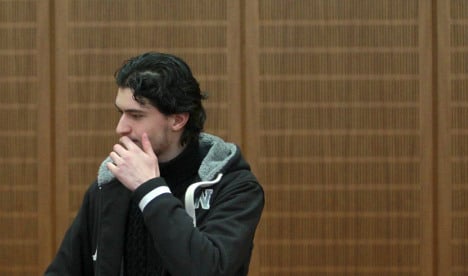 The three songs by a German man under the name Abou Maleeq, were described as Islamist fighting songs, or Nasheeds, by the federal department for media harmful to young persons, which banned them.

Arid Uka was jailed for life in February for the attack on US airmen in a bus, telling the court he had been influenced by propaganda and lies after seeing a video on the Internet purporting to show American soldiers raping a woman in Afghanistan.

He was also a devoted fan of Abou Maleeq, the Berliner Zeitung newspaper said on Friday. He wrote “I love you for Allah, Abou Maleeq” on his Facebook page just a few days before carrying out the deadly Frankfurt attack.

Abou Maleeq is a 36-year-old German man originally called Denis C., from the Kreuzberg area of Berlin, Die Welt newspaper reported. His musical career began in gangster rap under the name Deso Dogg, but he entered the radical Islamist Salafist scene and regularly publishes militant rap songs on the internet – under his latest moniker Abu Talha.

One of the three newly banned Abou Maleeq songs is rated as race baiting, and includes the words, “Mujahid run! Mujahid fight! See how the Kafir dies and burns… Allah promised victory would come… We hold the line to the death. Our aim is Sharia, until death comes to us.”

A government spokesman said these fighting songs, “push young Muslims to take part in Jihad, and promote martyrdom as something to strive for.”

Berlin state office for the protection of the constitution said the songs were aiming at young Muslims, to indoctrinate them with the militant-Salafist ideology. The authorities have been working towards the ban since October 2011.