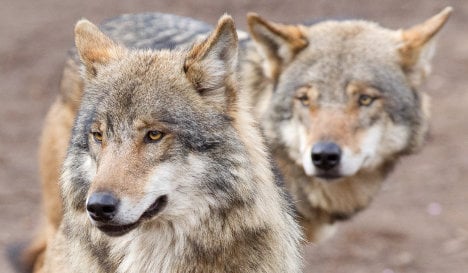 Lamb? no thanks, we'll take the venison. Photo: DPA

“The eating habits of wolves are the biggest point of conflict linked to their resettlement in Germany,” said Hermann Ansorger, who led the team of wolf-poo testers. “That led us to examine the feeding behaviour of the wolves which migrated to the Lausitz area a good decade ago.”

He and the team from the zoology department of the Senckenberg Research Institute in Görlitz, Saxony, examined more than 3,000 samples, looking for hair, fur, bones and teeth of wolf prey, he said in a statement.

Their research showed that more than 96 percent of wolves’ food was wild animals, with roe deer top of the menu, accounting for 55.3 percent.

“Less than one percent of the analysed prey animals were farm animals,” said Ansorge. “As long as sheep and co are well protected and there is enough choice among the wild animals, wolves do not take the risk of being confronted with electric fences or sheepdogs.”

Other animals popular with local wolves were red deer, which accounted for 20.8 percent, and wild boar which were 17.7 percent. Rabbits were not favoured, comprising just under three percent, according to results published in the Mammalian Biology journal.

Ansorge said it was also interesting to see how the wolves had altered their hunting habits as they migrated to Germany from Poland. He said Polish wolves largely hunted red deer, and this was continued during the first few years that the wolves were in Germany.

But the German woods are less roomy than those in Poland, and are interrupted by pathways and fields – giving rise to more roe deer and wild boar. The wolves needed less than two generations to adapt to this new landscape, and quickly changed their hunting habits to focus on roe deer and wild boar, said Ansorge.

Wolves were protected in Germany in 1990, but it took more than a decade before they settled on German soil and had pups. Now there are thought to be nine families in the Lausitz areas, including around 34 young animals.

“The potential for conflict between people and wolves is very low. There is no reason for further resettlement by wolves,” said Ansorge.