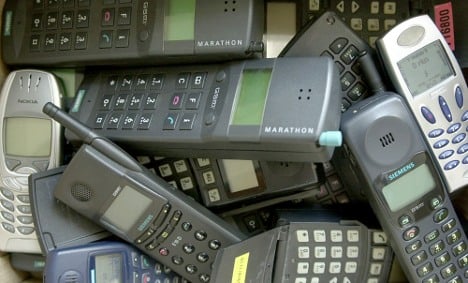 Dorothea Steiner told The Local she wanted to see a €10 deposit on mobiles, in the form of a discount on new phones – when a customer hands in an old one.

“Or if you don’t buy a new one, you can give the old one back and you get the money,” Steiner told The Local.

“It’s a first step to finally get a grip on the growing wilderness of scrapped electronic devices, and to significantly raise the proportion of recycled phones,” Steiner told the Neue Osnabrücker Zeitung newspaper on Thursday, when she presented the proposal to the German parliament.

Steiner added that efficient electronic recycling would not only help the environment, but would help save dwindling resources of precious metals. “Mobiles phones and other electronic devices use so many rare metals that it’s irresponsible to just throw them away,” the environmental policy spokeswoman said.

Steiner believes around 100 million mobile phones are currently being used in Germany. “At the same time, more than 80 million old mobiles are lying around in drawers,” she added.

It’s estimated that around 1.6 billion new mobile phones go on the market every year, which contain some 400 tons of silver, 38 tons of gold, and 14 tons of palladium, another rare metal essential for the electronics industry. “This treasure needs to be saved,” said Steiner.

Steiner put some of the blame for the mountains of scrapped electronics on large technology fairs, like CeBIT currently in Hannover, constantly selling new products. “New devices are coming on the market regularly and at ever shorter intervals,” she said in Neue Osnabrücker Zeitung.

“The mountain of obsolete models is growing all the time.”

“Of course we haven’t worked out all the details yet, because we want to work out what would be the most practical for the mobile phone traders,” she told The Local. “It would depend on how the companies want to do it, but probably the phones would then cost €10 more.”