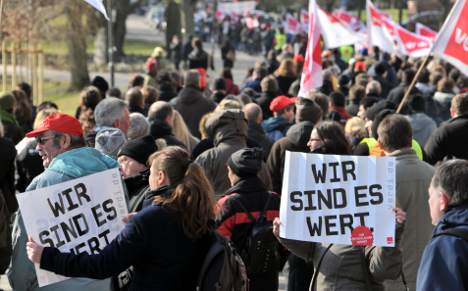 While Monday saw workers in western states of the country walk off the job, Tuesday was the turn of workers in northern states Hamburg, Mecklenburg Western-Pomerania, and Schleswig Holstein to push for a pay increase.

Public service union Verdi has been systematically mobilising employees in the sector to strike – the most disruptive of which so far were the repeated walkouts at Frankfurt airport.

On Wednesday, Verdi will summon workers in North Rhine-Westphalia to strike.

Verdi, Germany’s biggest public service union, is calling for a 6.5 percent pay rise for the two million people employed in the sector – or at least a raise of €200 per year.

Union head Frank Bsirske believes that the rate of pay in the public service sector does not match that of the private sector, and that the gap is widening. He called the difference “fatal for businesses and the attractiveness of a job in public service.”

In Hamburg alone, 2,000 people took part in strikes, particularly those in the council cleaning services and childcare.

Smaller strikes took place in Saxony and Saxony-Anhalt, as well as Baden-Württemberg.

“We plan on bringing public transport to a halt in Hannover on Thursday,” said Bsirske.

Over 10,000 people have been protesting across Germany since Monday, a number set to increase through the week if the rest of planned warning strikes go ahead.