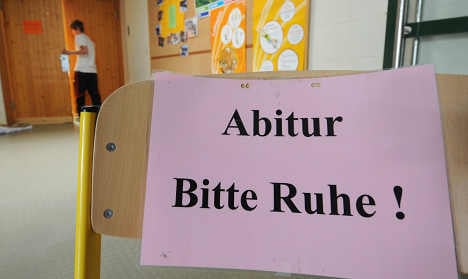 Should authorities agree to a unified test, it remains unclear if school holiday schedules, which are different in each state, would have to change.

Those opposing the one-for-all system argue that with a nationwide test, all German school children should have their holidays at the same time, instead of scattering the six-week summer breaks over a three-month period.

Studies suggest there are significant differences in the level of education among the various states. Bavaria has consistently ranked best, while Berlin’s students are close to the bottom.

In Germany’s federal system, education policy is a state matter. The governments of Hamburg, Bavaria, Lower Saxony, Schleswig-Holstein, Mecklenburg-Western Pomerania and Saxony favor a German-wide test, while North Rhine-Westphalia, Germany’s most populous state, is against it.

The discussion takes place ahead of a meeting of education ministers on March 8 – 9 in Berlin. Hamburg’s Education Minister Ties Rabe, of the centre-left Social Democratic Party, said, “I’m confident that we’ll be able to reach an agreement on the rules of how a uniform Abitur should be organized for all 16 states.”

But Sylvia Löhrmann, Green Party school minister in North Rhine-Westphalia, is against a one-Abitur-for-all concept.

“As simple as the proposal for a country-wide uniform Abitur sounds, if you think about the consequences they are immense,” said Löhrmann. She said pushing through something like that calls into question Germany’s federal system and the country’s regional differences.

“The assignments in all states, in every school and in every subject must be given out on exactly the same day,” she said.

“We want the compatibility and reliability (of the test) to improve massively,” he said.