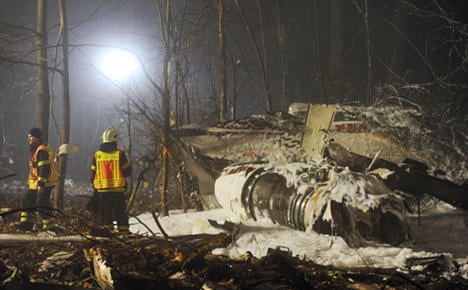 “We are still searching for another possible passenger, who we believe may also have been onboard,” said a police spokesman on Friday. They believe that bodies may be scattered in the surrounding forest.

“We’re still holding on to the hope that the plane landed and dropped people off before the accident happened,” he added.

The plane, a twelve-seat Cessna, lost contact with air-traffic controllers at around 7p.m. What police described as a “fireball” then came crashing down into a forest near Egelsbach in the state of Hesse – just a over two miles short of an airport.

“Up until that point everything to do with their flight was perfect,” said a spokesman from Engelsbach airfield.

Fire prevented the rescue team from entering the aircraft for an hour after their arrival, daily newspaper Die Welt reported.

It was only when they had drenched the glowing plane in water and foam that bodies could be pulled from the wreckage. The surrounding ground was soaked in kerosene – highly flammable plane fuel – making conditions treacherous.

The identities of the plane’s passengers, who were travelling from Linz, Austria, have not yet been released.

It may take several days before an in-depth investigation into what caused the explosion can begin, the spokesman said.