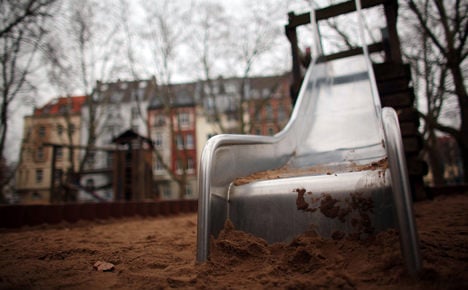 Inspectors from the safety certification company TÜV Rhineland descended upon play areas aimed at six to 12-year-olds. They closely assessed playtime classics such as slides, climbing frames and seesaws.

Out of the 50 that were checked, over half were in desperate need of a handyman and three quarters showed at least some aspect that could be dangerous for even the toughest of tikes.

A mere 11 were deemed risk-free – leaving the average number of child-friendly play-areas at just over one in each of the 10 cities the Cologne-based TÜV assessed.

The organisation is calling for parents to be on the look out signs of danger at their local play-area, and to “inform the local authorities immediately,” head of the study Berthold Tempel said in a statement on Thursday.

“There have been a few child deaths in the past because of playground traps,” he said, adding there was a chance that a child could get caught by its head or neck in one of every five playgrounds inspected.

Worryingly, the TÜV also found that 23 of the 50 they inspected had nothing to break a child’s fall if he or she were to take a tumble while playing. Normally, playgrounds should have a spongy floor, a lawn or thick layer shock-absorbing woodchips to prevent injury.

The safety-conscious company has been checking out playgrounds since 2005, and in the past three years has rated 69 out of 75 as having a considerable lack of safety.

Of the 75, 16 have had to be shut immediately because they may pose “life-threatening” danger to an unsuspecting child.

But, since their work began, the amount of playgrounds that have received the “perfectly safe” badge of honour has gone up from 2 percent to 22 percent.

These figures may be swing widely though, as the number of areas the TÜV found to be in dire need of repair work went up from 30 percent to 54 percent in the past three years – despite an effort to address rotting wood and rust.

For the first time, however, the TÜV also tested the different playgrounds for how fun they were based on factors such as a variety of equipment and style.