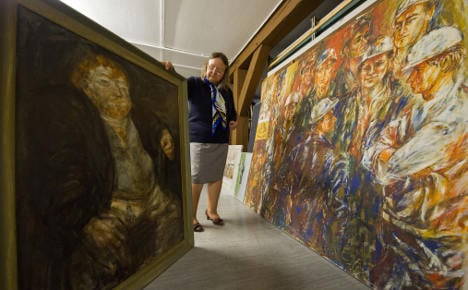 From busts of Karl Marx to paintings glorifying the “Heroes of Socialist Labour”, this communist art in a rundown building formerly used to store animal feed arouses little interest in today’s Germany.

One enormous picture among the many catches the eye — it shows Mikhail Gorbachev, the Soviet Union’s last leader, posing with long-term leader Erich

Several weeks after the meeting, the Berlin Wall would fall and communism be swept away in eastern and central Europe.

“Very poor quality,” comments Kristina Geisler of the Beeskow art archives in charge of the collection, amid the 1,500 paintings and myriad propaganda objects crammed, floor to ceiling, over three floors.

Dismissive of socialist kitsch, the art historian chooses to focus instead on the East German artists who managed to find a creative space somewhere between artistic freedom and the constraints of dictatorship.

“We also have here works of great artistic quality,” said Ilona Weser, who heads the archive.

To illustrate her point, she opens one of the drawers holding 13,000 graphic paintings by Bernhard Heisig, a major artist from the communist era renowned both in the former East and West Germany.

Works by many other figures of socialist realism are also stored in Beeskow, a quiet town southwest of the German capital. Some are covered in bubble wrap while others just lie on the linoleum floor.

Artworks such as “Celebration of Miners”, “Industrial Landscape” and “Album on the History of the Soviet Army” once adorned the walls of Houses of Culture and offices of the National People’s Army or the ruling Socialist Unity Party.

When these vestiges of the party’s 1949-1989 grip on power vanished with the fall of the Wall, East Germany’s last culture minister managed to save some of the artworks shortly before national reunification in 1990.

Anchored in a political ideology now consigned to the history books of Europe, they were stored in Beeskow and quickly forgotten.

“Art played a particular role in” East Germany, said Geisler. “It was not just about decorating the walls. The art reflected the evolution of society and is today a historical source.”

Jürgen Danyel, deputy director of the ZZF institute of historical research of Potsdam, has been trying for three years to draw up an inventory of the East German artworks with the help of other cultural bodies.

“Art acts like a seismograph and makes visible the erosion of communist power in the 1980s, for example,” he said.

However, nobody seems especially interested in this heritage. At the end of last year, the European Union turned down a request for funding to renovate and modify the warehouse.

Thus, at the end of her workday, Geisler takes one of the big keys she carries and closes up the building, leaving a large gold-framed painting of Lenin, a gift to the GDR from Czechoslovakia, to gather dust in the stairwell.