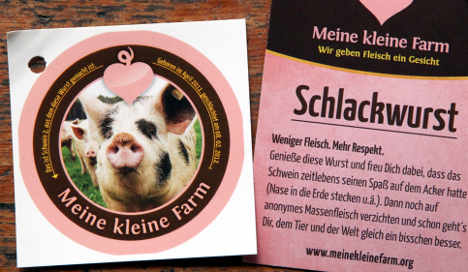 “Pig 3” has become an online star. The sow was the winner of the latest Meine Kleine Farm Facebook competition. The prize? Slaughter.

Pig 3 met its fate on Friday in Brandenburg at farmer Bernd Schulz’s pig farm – its memory will live on in the form of pork products. The pig’s face will appear on the packaging of 250 glasses of Leberwurst, 50 cotechino or Schlackwurst (a type of boiled Italian sausage) and 25 Mettringe sausages, already promised to buyers over the meinekleinefarm.org online shop.

Meine Kleine Farm is the brainchild of Berlin student Denni Buchmann, who is on a mission to change the way consumers think about meat. He thinks people should eat less meat and show more respect to the animals.

Buchmann regularly selects and buys pigs from Schulz’s farm, photographs them and posts the photos online. Users can then vote on which pig looks most tasty. The winner is slaughtered and its photo appears on the products.

Germans get through an astonishing amount of pork, and consumption is rising. 60 million pigs were slaughtered in Germany last year and 5.6 million tons of pork products were manufactured, 100,000 tons more than in 2010.

Buchmann doesn’t want to make consumers feel bad about eating meat, but raise awareness about the lives of the animals. The pigs have a happy life on Schulz’s farm, running around in the open air, rooting around in mud and playing with the other pigs, Buchmann told the Tagesspiegel newspaper on Sunday.

Schulz, who owns around 300 pigs, gives his animals organic feed and raises them according to the principle of “animal welfare in harmony with nature,” the motto printed on a sign hanging in Schulz’s farmyard.

The concept is proving popular among consumers, who increasingly want to know where their meat has come from. Meine Kleine Farm now has over 800 fans on Facebook and business is picking up – products from “pig 4” and “pig 5”, due to be slaughtered next month, have already sold out.