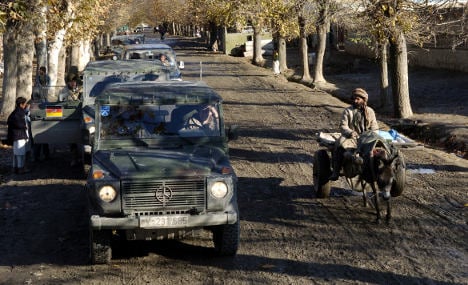 After 300 protesters massed outside the German Taloqan base in northern Afghanistan, the commander withdrew the 50 troops to the larger Kunduz base camp 70 kilometres away, abandoning the camp around a month ahead of schedule.

A Bundeswehr spokesman said the troops had taken all military vehicles with them, but it remained unclear whether the soldiers would return at a later date to complete the clear-out. The relatively small camp is said to be difficult to secure, since it is in the middle of the town of Taloqan, capital of the Takhar province, with a population of 200,000.

State broadcaster ZDF reported that stones had been thrown at the camp, which was also attacked in May last year, when several people were shot dead. Taloqan is also the town where an Afghan police chief and two Bundeswehr soldiers were killed in an attack on the governor’s palace last year.

Unrest has escalated dramatically following the alleged burning of several copies of the Koran by US soldiers at their Bagram base earlier this week. The exact circumstances of the burning remain unclear – the holy texts were apparently burnt accidentally on a garbage heap by soldiers unaware of what they were.

Several people have been killed during violent protests since then, and two soldiers from the NATO-led international mission ISAF were shot dead by an Afghan soldier on Thursday.

US President Barack Obama’s official apology to his Afghan counterpart Harmid Karzai has done little to quell the protests, which have been joined by thousands of Afghans across the country.

The Taliban has sworn revenge for the incident and called on Afghan soldiers to abandon their posts, promising to welcome all deserters as “heroes.”