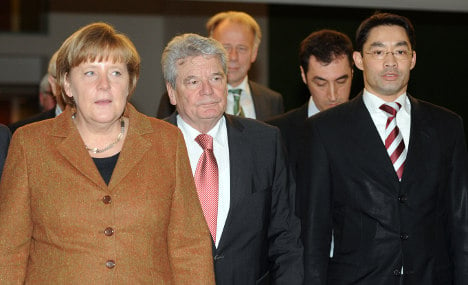 The fallout from the row between the CDU and the FDP spilled into public after stories emerged of a stormy meeting between the coalition partners as the decision was being made on Sunday.

According to media reports, Chancellor Merkel was incensed after she only heard of the FDP’s decision to back Gauck via the news wires.

“It got loud,” one anonymous participant in the meeting told the Süddeutsche Zeitung.

Volker Kauder, head of the CDU’s parliamentary faction was said to have been particularly infuriated, because he had a reputation for defending the shaky alliance with the Free Democrats.

The FDP’s announcement forced Merkel either to back Gauck’s nomination or risk the future of her centre-right coalition – something she decided against in the face of the ongoing euro crisis and the massive popularity of Gauck.

FDP leader Philipp Rösler, who is also vice chancellor and economy minister, told Die Welt on Tuesday that the conservatives had seriously threatened to bring down the government. “The (CDU) mentioned ending the coalition several times,” he said.

While CDU General Secretary Hermann Gröhe warned his party “not to lash out in public,” some of his senior colleagues could not resist taking swipes on Monday and Tuesday.

Deputy parliamentary leader Michael Kretschmer called the FDP’s behaviour a “flagrant breach of trust,” while his colleague Wolfgang Bosbach warned darkly, “you always meet twice in a lifetime,” – a German saying warning that bad decisions often come back to haunt you.

Indeed, there have already been suggestions that the CDU could now overrule the FDP on some of its flagship policies, such as reducing taxes, defending data protection, and its opposition to ratifying the international copyright agreement ACTA. For a party still languishing in the opinion polls, the long-term effect on the FDP could be devastating.

“For us it was about the honour and the authority of the office of head of state,” he told Die Welt newspaper, denying that his decision to support Gauck was mere populism. “If it had been about the FDP, then with our poll ratings I wouldn’t have risked new elections.”

FDP General Secretary Patrick Döring backed him up in the Passauer Neue Presse daily: “It’s pretty surreal if we’re now being criticized for supporting the candidate who has the biggest support among the people.”