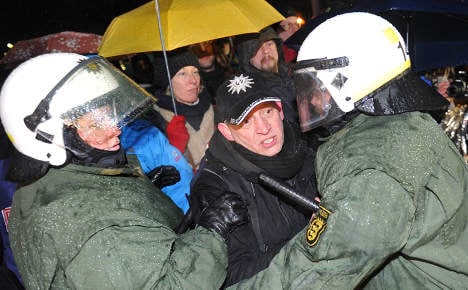 City officials said on Wednesday morning they were pleased with how the operation in the Schlossgarten park went. They said 2,500 officers had encountered little violence.

But protesters, who were trying to protect 176 trees that authorities say need to be cut down or moved as part of the project, charged that police had been overly aggressive during the eviction and had even attacked people with batons.

A spokesman for the protesters, Matthias Herrmann, called the operation “hectic and escalating.”

But a Stuttgart police spokesman said that there had been only “occasional baton use” when protesters attempted to set up a barricade. A 38-year-old man was arrested after he allegedly set off fireworks near officials, according to police.

Others protesters had to be forcibly cut away after they chained themselves to trees. Some used pallets to erect barriers on access roads, police said. Two even encased their arms in concrete and police were still figuring out how to deal with them as of mid-morning.

Stuttgart 21 is a multi-billion-euro project that aims to transform the Baden-Württemberg state capital into a major European transport hub by laying 57 kilometres of new track and rebuilding the city’s main train station underground while turning it around 90 degrees.

But many have baulked at the cost of the plan and what they say will be damage to the local environment. Violent protests flared in 2010, but the government has insisted that construction must continue. On Sunday, protesters tried to mount heavy equipment to prevent the cutting down of trees but were removed by police in a prelude to Wednesday’s eviction.

At the park, protesters had set up dozens of tents and tree houses before the police operation began at about 3 am. Officers first asked protesters to leave on their own – which some did – before they began the eviction.

Stuttgart 21 project spokesman Wolfgang Dietrich said the police operation had gone “very well” because protesters had, for the most part, abstained from violence. Authorities could begin felling trees as early as Wednesday afternoon.