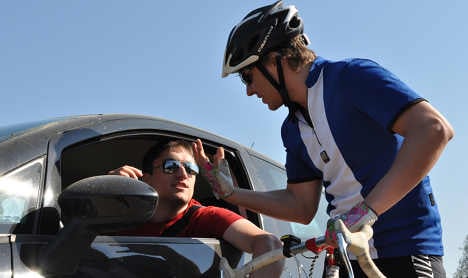 The police blame residents’ refusal to obey traffic rules and careless drivers. People cross streets illegally from between parked cars. Truck drivers make right turns without looking to see if a cyclist is in the right lane. And cyclists ride through red lights without a trace of regret, authorities said.

Markus van Stegen, a long-time traffic analyst for the city’s police department, said those are some of the reasons for the high death tolls, The number of injured increased from 2010 to 2011 by 2,121 to 17,034 – a 14.2 percent increase. The total number of accidents stagnated at around 130,500, but police authorities said it had been significantly lower years ago.

Last year 11 cyclists died in traffic accidents. Three were killed by trucks turning right and another three from cars turning left, according to Bernd Zanke of the German cycling association Allgemeinen Deutschen Fahrrad-Club. Both Stegen and Police Vice President Margarete Koppers agreed that while drivers share the blame, there’s been a significant change in how pedestrians and cyclists conduct themselves and a much greater willingness on the part of these groups to disobey the law.

Of the 29 pedestrians who were killed in traffic accidents on Berlin streets last year, 25 were either mainly or partially responsible for the accident, Koppers said. She said she often commutes herself by bike and is usually the only cyclist who actually stops for a red light.

Stopping for a red light “is something other cyclists often look down upon,” she said. “When I brake anyway I often have to deal with people cursing at me.”

Koppers said drivers are far from blameless, noting that she once flipped over a car door that suddenly opened in her path. She also crashed on a sidewalk after being aggressively driven off the road by a Berlin bus driver.

City authorities added 13 km of bike lanes last year and more are planned. Koopers said that’s all good and well, but “what we need is a change of thinking and a greater consciousness for the dangers of being on the road.” People cannot view a red light as a suggestion to stop. They need to stop and only move when the light turns green, she said.