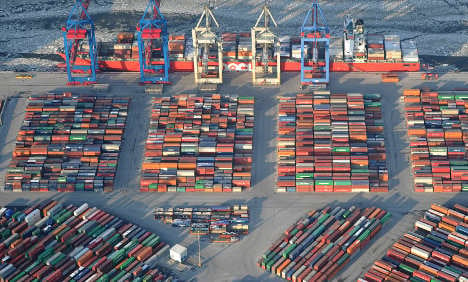 Europe’s biggest economy exported €1.06 trillion ($1.4 trillion) in the whole of last year, exceeding the one-trillion mark for the first time, the national statistics office Destatis said in a statement. Imports also rose to a record €902 billion.

Exports declined by 4.3 percent in December alone to their lowest level since April, as the effects of the region’s debilitating debt crisis increasingly made themselves felt, the data showed.

And with imports also falling by 3.9 percent, Germany’s trade surplus – which had ballooned to €158.1 billion throughout the whole of 2011 – contracted to €13.9 billion in December.

The full-year data place Germany as the world’s number two exporter behind China which posted exports worth a total €1.432 billion and a trade surplus of €117 billion in 2011.

China, along with the eurozone’s second-biggest economy, France, are Germany’s main trading partners.

But France posted a trade deficit of almost €70 billion in 2011. France has a structural trade deficit and is increasingly looking to the German model as a guide to raising competitiveness and exports.

On a 12-month basis, exports to fellow eurozone countries – which buy around 40 percent of all German exports – declined by 3.3 percent in December, while exports to countries outside the single currency area jumped by 14.7 percent.

“It was a bad December through and through,” said Commerzbank economist Ulrike Rondorf.

“Following the plunge in industrial production, the steep fall in exports is the second poor German data release for December,” she said.

On one hand, the trade data probably reflected feeble demand, particularly in the eurozone, Rondorf said. On the other, it could be partially attributable to calendar effects, the economist suggested.

“We expect the German economy to have contracted by 0.3 percent in the final quarter of 2011 compared with the third quarter,” she said.

Annalisa Piazza at Newedge Strategy also said the trade figures “don’t bode well for gross domestic product in the fourth quarter, as the contribution to growth might be negative over the quarter.”

She estimated that German GDP contracted by around 0.2 percent quarter-on-quarter in the October-December period.

“But we see downside risks now that net exports have been quite poor in December and industrial output showed a large contraction in activity in December,” the economist said.

“That said, prospects for 2012 remain relatively optimistic. Business confidence indicators have returned in expansionary territory in January and there are signs of consolidation in the German labour market that – in the medium term – will continue to support domestic demand,” Piazza said.

The statistics office Destatis has already estimated that GDP likely shrank by “around a quarter of a percentage point” in the fourth quarter of 2011. More concrete numbers are scheduled to be published next week.

Economy Minister Philipp Rösler said that while 2011 as a whole had been a record year for German exporters, the situation was “currently more difficult, in view of the current phase of weakness.”

Nevertheless, the German economy “remains highly competitive and will know how to use its growth opportunities when the global economy recovers,” the minister said.