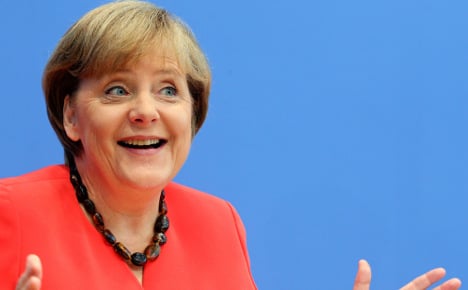 The Christian Democrats (CDU) and their Bavarian CSU allies had the support of 38 percent of voters, the weekly Forsa survey for Stern magazine and broadcaster RTL found.

The result, up two points from last week, is the highest for the conservatives since forming a coalition with the pro-business Free Democratic Party (FDP) in 2009.

But unlike their senior coalition partner, popularity for the FDP continues to wallow at a measly three percent – which is below the five percent threshold to win seats in parliament.

Support has been falling for the struggling party, as 40 percent of people who said they would vote for them in 2009 have now moved over to Merkel’s conservatives, the poll revealed.

This week’s loser is the Green party, whose popularity with German voters reached the lowest point in two years, at 13 percent. This is a drop of two points in a week.

For the first time since March 2011 the conservatives and the FDP are stronger combined than the Greens and the SPD, with 41 points.

But if an election was called now, Merkel’s party could only win if they joined forces with the SPD or Greens because of the FDP’s disappointing performance.

Güllner is putting the conservatives’ success down to Chancellor Merkel, who “is pulling the party to the top.” Also helping Merkel’s popularity is the fact Germany’s robust economy has so far managed to avoid being dragged down by the eurozone debt crisis.

A separate poll, also by Forsa for Stern magazine, showed 53 percent of

Germans believe Europe’s common currency the euro “can be defended,” compared to only 41 percent that held this view in October 2011.