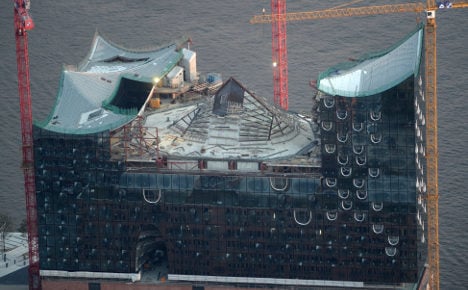 The Elb Philharmonic concert hall already dominates the skyline of the Hamburg harbour, where it was planned to be the vanguard of an extensive redevelopment.

Designed by Swiss duo Herzog & de Meuron it sits atop of an old brick warehouse and is made primarily of glass.

But the project has run into massive problems, plunging the city government and construction conglomerate Adamanta, which includes German building giant Hochtief, into years of strife over spiralling costs and disappearing due-dates.

The city was initially prepared to contribute €77 million to the project – but this figure has since gone up by nearly five times to more than €323 million – more than half the expected €600 million total cost. And the original completion date of 2010 has been pushed back to 2014.

“The city has a good chance of getting money back from Hochtief,” said Heribert Leutner, head of the city’s project’s management association.

“But the case is complicated and could last for a very long time.”

Complications arose almost as soon as construction started in 2007, prompting several requests for more public funding within that year.

Large sections of the building were redesigned the following year, which pushed costs up even further. And a stream of problems with the architects and the construction conglomerate followed, also making the project more expensive.

The building’s designers had underestimated certain costs – such as an acoustic panelling for the main concert hall which cost five times as much as expected, adding more than €10 million to the bill.

They also added a third concert hall to the project after initial plans and costs had been submitted to the city.

When completed, the project will also include a hotel and 45 private apartments.