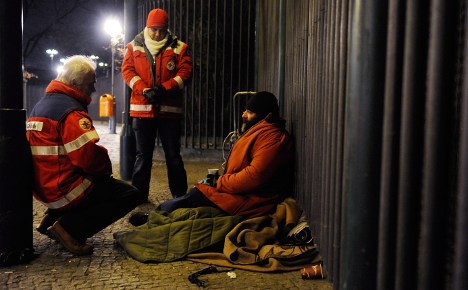 One state social minister has called for homeless people to be left to sleep in warm doorways and underground train stations, while some police are inviting them to spend the night in empty cells to escape the cold.

The 55-year-old homeless man was found dead on the park bench in Magdeburg on Thursday morning, with paramedics saying it looked like he froze to death overnight.

He was just one of more than 120 European victims of the arctic weather that currently has much of the continent in its grip, delivering temperatures as low as minus 33 degrees Celsius in Ukraine where 63 have died in the cold.

Some areas of Germany saw minus 20 degrees Celsius while most of the country has been well below zero for several days now.

This has prompted German police to urge people to keep an eye on those at risk, such as the elderly and homeless. A Magdeburg police spokeswoman told The Local she did not know how many people were sleeping outdoors in the city, but that they were, “making a huge effort to care for them this winter.”

Officers were offering them the chance to come in out of the cold and sleep in empty police cells – or taking them to hospitals, she said.

“The problem is that police cannot make people move. Sometimes they insist on staying where they are, in the cold.”

Guntram Schneider, North Rhine-Westphalia’s (NRW) minister for social affairs, also called on security guards to bend the rules while the extreme cold continued – and leave homeless people sheltering in doorways or underground stations rather than kicking them out.

There are approximately 22,000 people living on the streets in Germany, around half of them in NRW.

Last year four died of the cold across Germany, while in the winter of 2009/10, at least 17 people died on the streets.