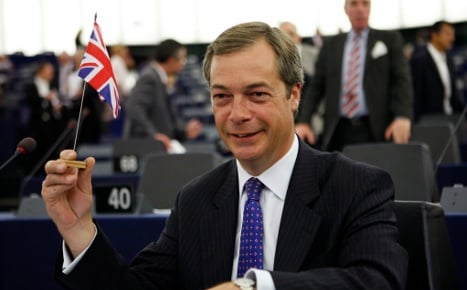 The move by parliament president Martin Schulz prompted Nigel Farage to storm out of the Brussels chamber on Wednesday.

Farage, who heads the United Kingdom Independence Party (UKIP) likened Germany’s proposal for EU control of Greece’s public spending to placing it under control of a “Gauleiter” – a Nazi administrator in charge of a region during the Third Reich.

His microphone was eventually turned off by Schulz, a German Social Democrat, at which point Farage “had no option but to walk out of the chamber in disgust,” his spokesman said in a statement.

The comment provoked uproar, especially among German MEPs, with Green Party representative Reinhard Bütikofer accusing the UKIP leader of spreading, “hatred in the European Parliament” and “hatred between European peoples.”

Farage later said he was only repeating a word being used in the British media.

He then said he thought their plan “must have been a joke.”

Farage criticised a German proposal for EU control of Greek public spending that was shot down at an EU summit over the weekend. He told the room that Athens was already “practically an EU colony,” and that their proposal was “a huge mistake.”

The UKIP party does not support Britain being a member of the European Union, and if newly appointed president Schulz decides to take punitive action against Farage, he could face a fine.

“Schulz is not entitled to comment on the content of a speech made by an MEP,” said Farage who has lodged a formal complaint against Schulz.