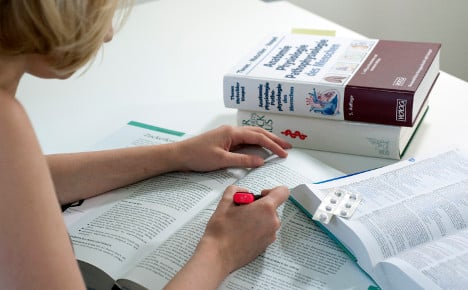 The results come after years of media speculation that more German students are taking prescription drugs such as Ritalin and beta-blockers to calm nerves, study longer and bag better grades.

Researchers at the Higher Education Information System (HIS) asked 8,000 students across the country during the last academic year about how they combat stress and increase performance, releasing the results on Monday.

Student vets and sports majors were the most likely to take pharmaceuticals, representing 18 percent and 14 percent of those regularly taking stimulants so they could study for longer – or sleeping pills and even anti-anxiety drugs to control their moods, said the HIS study, which was commissioned by the Federal Ministry of Health.

Maths students were the least likely to take drugs to help them perform, with just three percent admitting to taking chemical enhancers on a regular basis.

Gender seemed to make no difference to how students took drugs, but women were much more likely than men to take homeopathic therapies, vitamins or natural supplements to aid their studies and combat stress.

Those students who said they were neurotic were twice as likely as others to be on prescription drugs such as antidepressants or beta-blockers, or obtain psycho-stimulants like Ritalin, via the internet or from friends.

The students said they were turning to drugs due to stress, exam nerves or the pressure to succeed. Considerably fewer named curiosity or “searching for a high” as motivation.

Only five percent of said they regularly took the chemical route to academic success while the same amount said they had opted for what the study called “softer” methods, such as homeopathy and caffeine.

Over 60 percent of students questioned said their relaxation methods included meeting friends, playing sports or watching TV. And in true German fashion, 46 percent said they went to a sauna to unwind.

“It was particularly important for us to learn more about the motives of people who take performance enhancing drugs,” said Dr Elke Middendorff, the study leader.

“Around 55 percent of students choosing to ‘brain dope’ are doing so to tackle nerves and overcome stage fright,” she added. Trying to increase intelligence was named as the second most common reason.