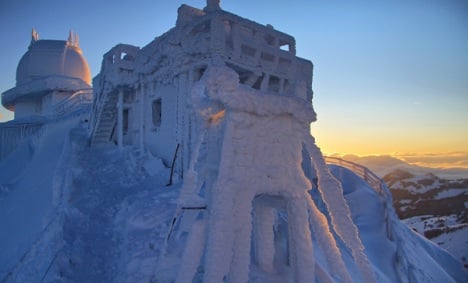 One woman died in Velten, Brandenburg on Saturday night after falling into a frozen stream and collapsing on the road. Her body was found the following morning.

Those working with homeless people in Germany are warning that the cold is a particular danger for them in rural areas and the east, where the network of emergency shelters is not as complete as in cities and the west.

Around 22,000 people are thought to live on the streets in Germany. Last year four died of the cold, while in the winter of 2009/10, at least 17 people died on the streets.

Animals are having trouble with the fact that a mild winter has suddenly turned into a harsh one, with hedgehogs in particular danger, said the nature protection association NABU.

Unseasonably mild temperatures over the last few weeks have meant many hedgehogs have woken up early from their hibernation – but now they are out and about in the cold without much to eat.

Migratory birds such as storks and cranes which came back to Germany from their southern wintering grounds will also have trouble finding much to eat. “We reckon they will turn around and fly back to their winter quarters,” said Kai-Michael Thomsen from NABU.

Parts of the south east were not expected to get warmed than minus nine degrees on Wednesday afternoon, although the west is generally much warmer, with temperatures hovering around minus one, the German Weather Service (DWD) reported.

Snow is also expected in the very south of the country, improving conditions for those wanting to hit the ski slopes.

The rest of the country will remain lightly frosted and windy, as “north-easterly gusts from Russia continue to bring freezing air from the large high pressure system currently swirling over the country’s arctic north,” DWD meteorologist Helmut Malewski said in a statement.

Clear skies over Wednesday night will push temperatures down to between minus 12 and 18 degrees Celsius, while in some areas, it may even be a deeply frozen minus 20.

And the Baltic coast is expected to be hit by heavy snowfall, with slightly milder temperatures of minus seven degrees Celsius.

This snow will continue into Thursday daytime when “strong winds could create blizzard-like conditions,” said Malewski.

The rest of the country will be relatively cloudy with only a small chance of rain or snow, apart from the south which could see more of the white stuff. The east will be particularly cold, with no more than minus 11 degrees Celsius expected.

On Thursday coastal areas will stay blanketed in snow but inland areas will be clear and dry, meaning a heavy frost may build up. There will be lows of minus 17 degrees in the east and a slightly warmer minus 10 degrees in the northwest. The coast will remain only slightly below freezing.

By Friday, the clouds will begin to move down from the northern coastline, bringing snow to the rest of the country. In areas where there is no snow, there will be a thick, icy frost. Temperatures will stay firmly in the freezing zone, with national highs of minus 11 degrees Celsius.

The weekend is not expected to warm up either, with snow expected across large parts of the country and lows of minus 15 Celsius, with some southern regions experiencing lows of minus 20, said Malewski.

Saturday will be equally freezing during both the day and night, with light snow continuing to fall over much of the country.