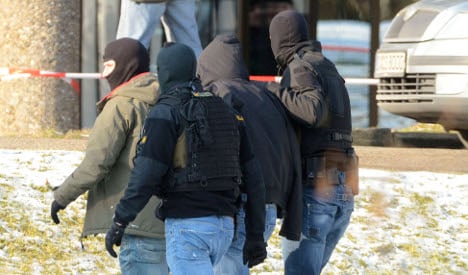 Special commandos under orders from the Federal State Prosecutor raided the home of the 31-year-old man, named only as Carsten S., after he was formally accused of helping the self-styled Nationalist Socialist Underground (NSU). He is also accused of one count of attempted murder.

The prosecutor’s office said on Wednesday Carsten S. had maintained contact with the three members of the NSU for five years after they went underground in 1998, giving them money as well as helping them to get a gun and ammunition.

He is said to have worked with Ralf Wohlleben – another alleged NSU supporter who was arrested in November – to get the items.

“Due to a close personal and ideological connection to the NSU members, the accused accepted that the weapon could have been used for far-right murders,” the office said in a statement, although it remains unclear whether the gun he was involved in procuring was actually used to kill anyone.

He is said to have been active in the fascist group Thüringia Heimatschutz in 1999 and 2000, and although he said in a statement last week that he had opted out of the neo-Nazi scene in 2000, the prosecutor said he maintained contact in such circles until 2003.

The killings attributed to the NSU – of eight shopkeepers and staff of Turkish origin and one from Greece, as well as that of a policewoman – were not linked to right-wing extremist violence until last year when two of the NSU members were cornered after a bank robbery.

One shot the other and then himself before police could get to them, while shortly afterwards their alleged accomplice, a woman called Beate Zschäpe, is said to have blown up their flat in the Saxon town of Zwickau shortly afterwards. Zschäpe is currently in custody after handing herself in. Carsten S. is the fifth alleged supporter to have been arrested.

Detectives linked the trio to the killings only after finding the gun used in all of them in the rubble of the flat – as well as a DVD claiming responsibility.

The multiple errors made by authorities in their pursuit of the gang and numerous embarrassing revelations about informants having been within arm’s reach of them have prompted the establishment of a dedicated centre for intelligence work into the neo-Nazi scene in Germany.