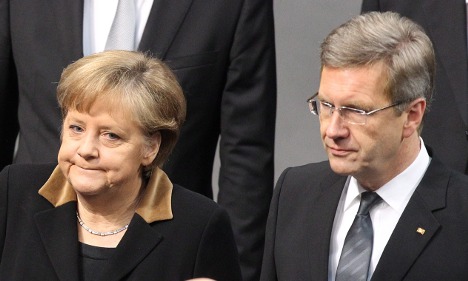 Lower Saxony public prosecutor Irene Silinger ruled on Friday that calling Wulff a liar could not be considered defamatory, but should be regarded as part of the debate over his involvement in what has become known as the “loan and media affair”.

Leader of the Greens in the Lower Saxony state parliament Stefan Wenzel called Wulff a liar and called for him to resign following a debate on his conduct while state premier there.

“Wulff is a liar and he should resign before he pulls law and order and decorum further into the dirt,” said Wenzel. Three official complaints that this was slander and defamation were dismissed by Silinger, who said the comments were part of Wenzel’s right to free expression.

Wulff’s conduct while he was state premier of Lower Saxony is being increasingly scrutinised, particularly since police raided the home of his former spokesman Olaf Glaeseker, the man regarded as Wulff’s closest advisor, searching for evidence of corruption.

The latest poll on Wulff’s popularity shows 50 percent of Germans want him to resign – up from 44 percent who said so at the start of January. Those who want him to stay in office accounted for 45 percent asked in the survey conducted by television network ZDF and the Tagesspiegel daily newspaper. A further five percent said they did not know what he should do.

“Germany is considered in many countries an example in terms of clean politics and the independence of its decision-makers,” he said in this week’s Welt am Sonntag newspaper.

“The debate over Wulff certainly takes something away from Germany’s nimbus.”

He said the president’s job was largely to give the country moral orientation, and Wulff must be happy that he can still do that. “It will be a long way for Christian Wulff to win back the moral authority that he needs for that,” said Steinmeier. “If he stays on the unsafe ground of his answers until now, then that way is too long.”

When asked in the same paper how much future Wulff had, Merkel said, “Our federal president will make many more important points for our country and our communal life.”

Further details of the Lower Saxony’s state involvement in the annual Nord-Süd-Dialog business lobby event emerged this week, showing the government was more heavily involved as previously thought. And the Die Zeit weekly paper said that the NordLB bank which was majority owned by the state had sponsored the even in 2007 and 2008.

Glaeseker, Wulff’s advisor and spokesman for the Lower Saxony government, was closely connected to Manfred Schmidt who organised the lobby meeting, and had accepted free holidays in Schmidt’s homes.

Wulff fired Glaeseker shortly before Christmas without publicly giving a reason, after years of working closely together.

Although no criminal allegations have been made against Wulff, investigations are continuing into Glaeseker’s activities.

It is now more than six weeks since the start of the row over €500,000 Wulff, then Lower Saxony state premier, borrowed from the wife of a businessman friend and failed to publish. The businessman Egon Geerkens then accompanied Wulff on three official trips, it has been reported.

Wulff subsequently transferred the loan to a bank with which he had dealings, and made angry phone calls to newspaper editors about the publish the story.