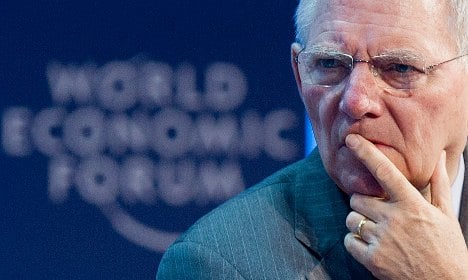 Cameron has refused to take Britain into a proposed EU fiscal pact, which would see member states agreeing to common deficit reduction targets, forcing other states to draw up an agreement outside the Union’s treaty structure.

Challenged at the World Economic Forum in Davos by Swedish Euro-MP Anna Maria Corazza Bildt over this approach, Schäuble said: “I would like to give you the mobile number of David Cameron.”

“Of course, this is not a joke,” he continued, as laughter erupted. “It would be much more better and better to understand for everyone outside of Europe, if we were to do what we will now have to do in our fiscal compact in the framework of European treaties.

“But that has to be done by unanimous decision, that is the basis of European treaties. Therefore, for the meantime, we go for 17 plus, I hope, nine. Everyone is invited to join,” he said.

Following Cameron’s refusal to take part, Germany and France pushed for the 17 nations of the eurozone single currency bloc to take part and they hope that nine more non-eurozone members will join them.

Cameron has been unrepentant, coming to Davos on Thursday to berate his EU allies for failing to promote growth and for seeking to introduce a financial transaction tax he regards as sheer “madness.”

European leaders will meet on Monday hoping to turn the page on the sovereign debt crisis that has undermined the euro and threatened the bloc’s weakest members with financial collapse.