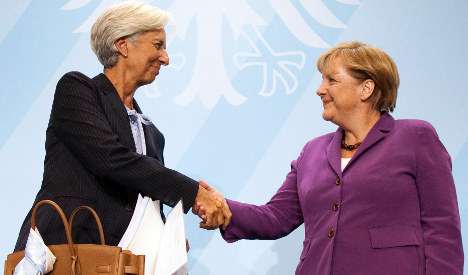 In a wide-ranging speech at the German Council on Foreign Relations think tank in Berlin, Lagarde also called for an additional $500 billion for the IMF as it seeks to keep afloat countries battered by the crisis.

And she had a dire warning for policymakers such as Merkel if they failed to do what was necessary, saying the world could slide into a “1930s moment” of isolationism, which led to the Great Depression and eventually to world war.

On the eurozone, Lagarde acknowledged that a great deal had already been accomplished but that the policies agreed so far “form pieces, but pieces only, of a comprehensive solution.”

She said the crisis-wracked eurozone had to focus on rediscovering growth as well as bolstering its defences against contagion from the debt turmoil and pulling closer together politically and economically.

To spur growth, she called indirectly on the European Central Bank to cut interest rates, already at a record low. With inflation falling sharply, “additional and timely monetary easing will be important,” she said.

“We need a larger firewall,” she added. “Without it, countries like Italy and Spain that are fundamentally able to repay their debts could be forced into a solvency crisis by abnormal financing costs.”

She proposed “folding” the leftover cash in the eurozone’s current rescue pot, the EFSF, into the permanent ESM bailout fund when the latter comes into force, likely in the middle of this year.

However, departing from the text of her speech, she stressed: “I am not talking about doubling” the €500-billion ($652-billion) ESM as reportedly sought by Italian Prime Minister Mario Monti.

Chancellor Merkel rejected the idea of ploughing extra cash into the ESM, telling reporters after a meeting in Berlin on Monday with Belgian Prime Minister Elio Di Rupo: “The first priority is to implement the ESM and to wrap up the negotiations on it.”

“Normally building up the capital (for the fund) would take five years but we are prepared to pull the tranches together and pay in faster. We will now discuss whether others are willing to do the same. But we can take action with the means at our disposal,” added Merkel.

Another move Lagarde proposed was “political agreement on a joint bond” that she said “would help convince markets of the future viability of European economic and monetary union.”

The creation of such a “eurobond” has long been a contentious issue among top policymakers, with the European Commission and France being in favour of such an instrument but German Chancellor Angela Merkel strictly opposed for now.

Partly to assist in battling the crisis, both in the eurozone and further afield, Lagarde said the IMF needed an additional $500 billion in new lending resources.

After a turbulent 2011, Lagarde announced that Tuesday’s updated IMF economic projections would result in “lower growth forecasts for most parts of the world.”

And she warned that if policymakers failed to grasp the seriousness of the situation, “we could easily slide into a ‘1930s moment’.”

“A moment where trust and cooperation break down and countries turn inward. A moment, ultimately, leading to a downward spiral that could engulf the entire world.”

However, Lagarde said, “I believe we can avoid such a scenario … although the economic outlook remains deeply worrisome, there is a way out.”

Speaking later to reporters, Lagarde called for a “sustainable” deal for Greece, as talks on reducing the crisis-hit country’s debt appeared to have hit a snag.

“We want the country to improve and we want it to be going back to the market at some stage. It cannot be on life support,” she said.

Negotiations on cutting around 100 billion euros from Greece’s massive debt mountain of more than 350 billion euros have broken up amid haggling on the rate offered on new bonds that will replace the maturing debt that will be written down.

In Brussels, Dutch Finance Minister Jan Kees de Jager said that the Netherlands was willing to let Greece declare a debt default if Athens failed to reach a deal with with its private creditors.