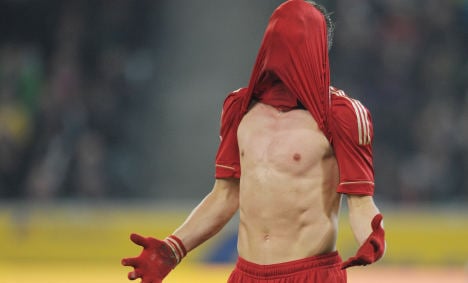 ‘Gladbach’s victory blew the Bundesliga title race wide open as both defending champions Borussia Dortmund and Schalke 04 can draw level with Bayern if they win their games against Hamburg and Stuttgart respectively this weekend.

This was Bayern’s fifth defeat of the season and after Dortmund-bound Marco Reus and 20-year-old winger Patrick Hermann put Gladbach into a 2-0 half-time lead, Heynckes admitted his side lacked the composure to get back in the game.

“They played their cards well to get the early goals and the turning point was the goal just before the break. After we went 2-0 down, they made it hard to come back and we were not in a position to force the game at the decisive moments.”

The 22-year-old Reus, who will join Dortmund next season, did his future employers a huge favour as he scored the first goal before Hermann added the second just before half time.

The pair then combined with 20 minutes left for the third goal to seal Bayern’s defeat which capped a fine team performance before Germany star Bastian Schweinsteiger scored a late consolation.

“Today was a tough fight for us, we knew we had to hit them on the counter, which we did two or three times, the coach prepared us well,” said Reus, who is sure to add to his three appearances for Germany with Euro 2012 beckoning.

Having also stunned Bayern with a 1-0 victory in Munich on the opening game of the season last August, ‘Gladbach completed the double.

“We have played very well tactically and were very compact, it was difficult for Bayern to find a gap,” said their coach Lucien Favre, who has taken his team from the brink of relegation last season to second in the table this term.

“We defended very well, without giving away too many fouls. My team has done very well, it was important to get three points against Bayern again.”

The three points saw ‘Gladbach jump from fourth to second in the table an they are just a point behind Bayern and just three points now separate the league’s top four teams.

Munich’s vastly superior goal difference means they will stay top of the Bundesliga this weekend regardless of other results, but their defeat helps all three of their title rivals.

“We weren’t worse than them, but we still lost,” said Bayern captain Philipp Lahm.

“We made too many mistakes, you only need to look at the goals we conceded

to see that. We are disappointed as we worked hard, but have nothing to show for it.”