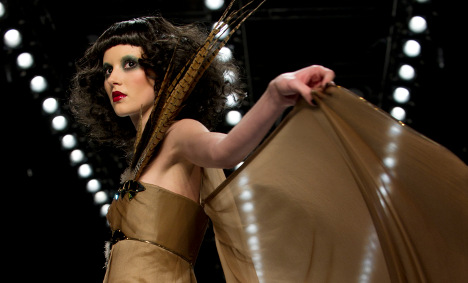 Although most events are aimed at trade representatives and the fashion press, there is a specific effort to draw in the public, with a series of “Showroom Days” where various exhibitions, fashion shows and performances will be open to all.

Escada Sport will be the first big name to put models on the runway, with its show at the Brandenburg Gate on Wednesday, while German designer Michael Michalsky is set to close the week on Friday with a show at the Tempodrome venue, usually used for concerts.

Potsdamer Platz metro station will be temporarily turned into a runway by Unrath & Strano, while Chinese designer Wang Yutao will make his European debut with a show.

Legendary model and actress Veruschka is expected to be seen on a runway, as is Dutch model Lara Stone, who has been named the face of Fashion Week.

Berlin does not impose limits on how thin models used during fashion shows can be, a spokeswoman for Bread and Butter told The Local.

“Our clients, the labels which exhibit here, they have complete freedom to use which models they want,” she said. “We do not impose any size or weight restrictions.”

Milan Fashion Week imposed a minimum body-mass-index (BMI) for models in 2006 after the death of a very thin Uruguayan model prompted calls for severely under-nourished looking models to no longer be used. Yet the fashion industry has continued to use very thin models, often using computers to make them seem even thinner in advertising photos.

The fickle nature of fashion is illustrated by work conducted by culture academic Daniela Döring who said that a century ago the perfect size for a woman was considered to be today’s size 44 – many sizes bigger than what is desired by the industry now.

The author from Potsdam, who has written a book about body measurement systems, said that in the 19th century, shops would have their own methods for sizing clothes.

The Manheimer brothers, big movers in Berlin at the time, had a star system, she said. Blue was for young women, yellow for those of normal size and red and green for older women. “Fraulein Yellow Star” – the 19th century equivalent of a perfect size 10, only bigger – was mentioned in novels, poems and songs of the time, she said.