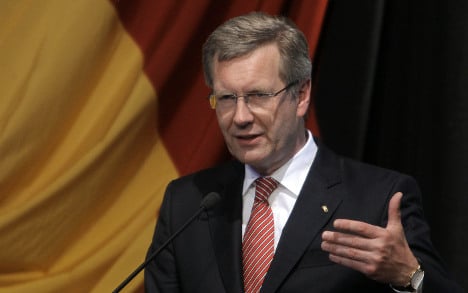 The affair over an undeclared loan of €500,000 from the wife of a businessman friend turned into a claim and counter-claim war of words on Monday, with Wulff’s lawyer saying the president was not scared of a newspaper publishing the text of an irate phone message he had left for its editor.

Deputy editor of Bild newspaper Nikolaus Blome defended his paper’s interpretation of the phone message as being an attempt to stop the story of the loan, which Wulff had failed to declare while state premier of Lower Saxony.

Speaking on a Sunday night chat show, Blome said that although the president may have demanded the story be held back rather than scrapped, it was clear that he wanted to stop it altogether.

Wulff himself said in a recent interview he had only asked for publication of the story to be postponed so he could return from a foreign trip before it became public. This was immediately contradicted by Bild which asked his permission to publish the text of the recorded message, something Wulff has not approved.

Wulff clearly wanted to stop the story being published, said Blome. “The president had perhaps seen the postponement as a stage, but clearly had prevention as his aim,” he said.

But Wulff’s lawyer Gernot Lehr, a specialist in media law, took to the airwaves on Monday, denying that Wulff was scared of having the text of his message published. Speaking on Deutschlandfunk radio, Lehr said if Bild wanted to print the text, it could.

“The president did not want to stop this report,” he said. “It is not correct that there is great fear here of publication, but is a matter for Bild newspaper if it wants to break this taboo.” He said the phone call had been a matter for the two men alone.

Wulff had already told the paper it was up to the editors to decide whether to publish the message text – but that he would not give them a green light to do so.

The affair is still gripping the German public, with the Blome interview attracting a record audience of just over 5.8 million people to the Günther Jauch chat show on Sunday night.

A survey published on Monday showed that 52 percent of Germans felt it was acceptable for Wulff to have borrowed money from his friends, while around 57 percent said they wanted even top politicians to be able to be invited on holiday by their friends.

But 55 percent told pollsters from Yougov that they did not feel well represented by their president, with only 28 percent saying they did.

Over the weekend Social Democrat leader Sigmar Gabriel and his Green counterpart Claudia Roth offered to work with Merkel to find a replacement for Wulff who could be supported by all parties.

And even though he said Wulff would stay in his job, the parliamentary leader of Wulff’s Christian Democratic Union (CDU) Volker Kauder said, “It was certainly no demonstration of wisdom to leave such a thing on the mailbox of an editor.”

Merkel’s spokesman on Monday again stressed the chancellor’s support for Wulff, saying she saw no reason to talk about a possible resignation.

Wulff is due to meet Head of the Chancellery Roland Pofalla – a senior figure in the CDU – this week, as well as the party’s secretary general Hermann Gröhe. Although both meetings were said to be long-planned, they are regarded as important.

Wulff cannot be forced to resign – the president is elected for a five-year term by a special assembly of parliamentarians, and can only be removed through a parliamentary impeachment process and a trial presided over by the Federal Constitutional Court.