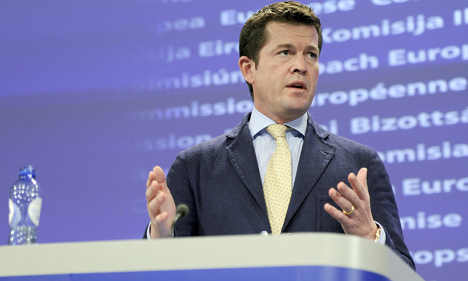 After his Christian Social Union (CSU) made several public overtures saying he would be welcome back, Guttenberg has agreed to meet party officials in Bavaria to discuss his participation in the 2013 general election, Der Spiegel magazine reported on Sunday.

The magazine said that support within the party for Guttenberg’s return was growing, and that Christian Meißner, a CSU official in Guttenberg’s home district, had asked him to attend a meeting within the next four to five weeks.

Guttenberg texted back that he would attend, the magazine said. The CSU is the Bavaria-based sister party of Chancellor Angela Merkel’s Christian Democratic Union.

Interior Minister Hans-Peter Friedrich, another big political mover in the CSU, seems to have come around to a potential Guttenberg comeback – after Bavarian state premier and CSU leader Horst Seehofer said last month he would do everything he could to bring Guttenberg back into politics.

Friedrich had been angered last year by a book Guttenberg published, “Failed – at First” in which he defended his conduct. Friedrich told Der Spiegel in December that the book had caused “wounds that don’t heal quickly.”

Now Friedrich has said he wants to know quickly if Guttenberg will be a candidate for the 2013 parliamentary elections.

Guttenberg was disgraced and forced to resign last spring after it was revealed that he had plagiarised large parts of his doctoral thesis. He moved with his family to the United States, where he said he was going to spend some time away from politics.

He paid €20,000 to a charity, as suggested by prosecutors, in exchange for them dropping plagiarism charges against him.

But Guttenberg continued to make headlines, first taking on an honorary position at the Washington-based Centre for Strategic and International Studies where he was described as a “distinguished statesman”.

He soon launched a scathing attack on his former colleagues, telling a security conference in Canada in November that European leadership was failing to understand what was necessary to tackle the debt crisis. He said German politicians were not reaching the people and had no idea how the European Union worked.

At the end of last year he was brought into European politics, appointed as advisor to the European Union’s internet commissioner.