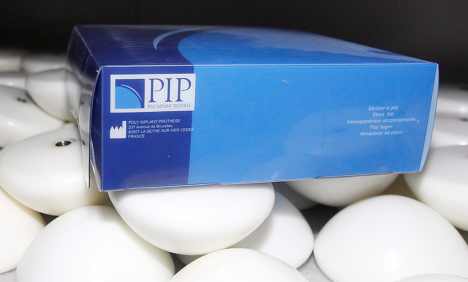 recommended that the PIP implants should be removed “as a precautionary measure.”

The Institute said it was revising advice issued on Dec. 23 that women should ask their doctors to check whether the implants had developed tears before deciding if further action was necessary.

“Due to the rising number of notices from doctors, trade organisations and hospitals in recent days, the BfArM has expanded its risk assessment,” the institute said.

“These notices say that silicone from such implants increasingly and over time can leak, even in those without tears.”

The German government has not said how many women have received the implants, but reported 19 incidents of leaking.

risk of serious health problems.” But in a message on its website it said: “All patients are recommended to have the implants removed at the clinic where they received them.”

About 300,000 women in 65 countries are estimated to have received implants

made by Poly Implant Prothese (PIP), which allegedly used an illegal industrial-grade gel that investigators say has led to abnormally high rates of ruptured implants.

Some estimates of the number of women affected are higher. France has already advised the removal of the PIP implants, while 13 other countries in Europe and in Latin America have urged women to get regular checkups.

Two of them of them – Bolivia and Venezuela – are offering operations to have the prostheses removed. Australia, however, has said it found no evidence that the implants posed a risk.

French police are investigating the now-defunct PIP and its founder Jean-Claude Mas, 72. Mas admitted to investigators that he switched the gel and hoodwinked quality inspectors in order to boost profits, according to minutes of a police interview conducted in October and seen by AFP.

The scandal has led to more than 450 lawsuits filed in three countries.