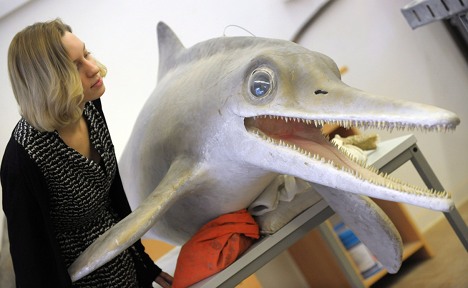 The Acamptonectes densus, or “rigid swimmer,” was three metres long, had sharp teeth and resembled a dolphin. It also had paddles for limbs and a beak-like snout suitable for hunting fish and squid.

The reptile lived between 65 and 145 million years ago, during the Cretaceous period, according to researchers at the State Natural History Museum in Braunschweig, who dug up the beast’s skeleton nearly seven years ago.

The discovery is particularly exciting because this order of animal, known as Ichthyosauria, was thought to have been largely extinct by the time of the Cretaceous, the scientists said.

“It’s a spectacular find,” said museum director Ulrich Joger. “With this, an entire extinction theory will be questioned.”

A portion of the almost perfectly preserved skeleton was found by a private collector scouring a motorway construction site near Cremlingen, Lower Saxony, in 2005.

He notified the museum, which dug up the specimen during a frantic three days of digging.

Since then, palaeontologists from Germany, Scotland, England and Belgium have compared the skeleton with a similar one found decades earlier in Great Britain and determined the two finds represented a previously undiscovered animal.