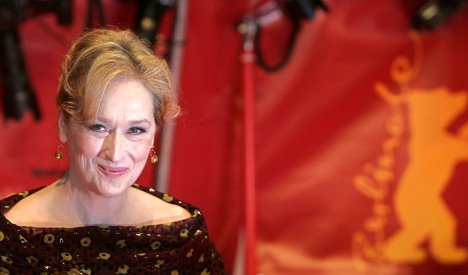 Streep, 62, whose latest film sees her portraying Britain’s former Prime Minister Margaret Thatcher in the biopic “The Iron Lady”, will receive the award during the February 9-19 festival, organizers said.

“Meryl Streep is a brilliant, versatile performer who moves with ease between dramatic and comedic roles,” the festival’s director Dieter Kosslick said in a written statement.

The award will be presented on February 14 at the screening of “The Iron Lady”, while audiences at the Berlinale, as the festival is known, will also be able to see five of Streep’s other films under its Homage section.

In 2003, Streep, who has appeared in more than 40 movies and has twice won an Oscar, shared the Berlinale’s Silver Bear award for best actresses with Julianne Moore and Nicole Kidman for their performances in “The Hours.”

The line-up for the 62nd Berlin Film Festival, which ranks with Cannes and Venice among the top European film competitions, includes a 9/11 drama starring Tom Hanks and a new picture from China’s Zhang Yimou.

British director Mike Leigh is set to chair the jury, which will also include Hollywood actor Jake Gyllenhaal and Franco-British actress Charlotte Gainsbourg, among others.