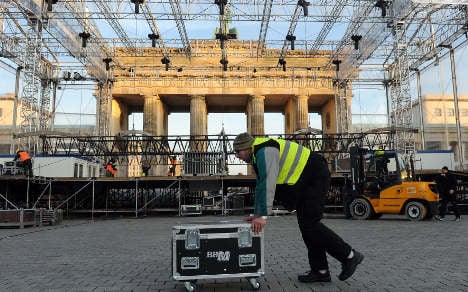 More than 1,500 security and rescue service staff will be on hand at the two-kilometre stretch of road between the Brandenburg Gate and Victory Column where Berlin’s main public party is to be held.

The Scorpions, Udo Jürgens and Kim Wilde will appear on stage in front of the Brandenburg Gate.

The German capital holds what is considered one of the world’s biggest public New Year’s Eve parties, attracting people from around the world. This year promises to be one of the most successful starts for the city, said Burkhard Kieker from the promotion firm “Visit Berlin”.

He told the Tagesspiegel newspaper that hotels and hostels from the smartest to the cheapest were booked out, with demand so strong that many establishments had raised their prices.

Although fireworks might seem an integral part of welcoming in the New Year, they are banned in a number of historical towns across Germany. Fears that rockets could start fires in thatched or half-timbered houses have led to bans in places like Hamlin, Hildesheim, Goslar and Celle.

A fire started by a rocket in the central old town of Goslar five years ago caused millions of euros worth of damage as it destroyed three half-timbered houses.