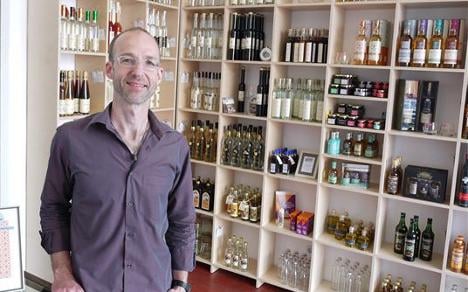 Brandenburg farmers were at a loss at what to do with their surplus potatoes in the late nineteenth century – until the government bought them and began the region’s first foray into industrial alcohol production.

More than 150 years later, Berlin and its surrounding area are again flush with spirits. But this time, small batch schnapps and liqueurs are tickling the taste buds.

Berlin gets in the spirit

The tradition of making and selling schnapps goes back centuries. Monks, farmers, and even pharmacists all tried their hand at the trade.

This history is illustrated in decorations at the Prenzlauer Berg liquor store Dr. Kochan Schnapskultur.

The owner Dr. Thomas Kochan pointed out a crucifix hanging in one corner to remind customers that in Europe schnapps production began in monasteries. An antique doctor’s cabinet illustrated the role spirits have played in medicine. There was also a large photo from the 1960s of a nattily dressed man holding a cocktail.

“For me, this man with a glass of liquor in his left hand shows the time when spirits were more popular than today,” said Kochan.

In the past, schnapps drinking has been associated with an older clientele. Younger Germans often prefer beer or wine. But Berlin is seeing a growing interest in these fortifying spirits among younger consumers.

Kochan, an ethnologist by trade and author of “The Blue Strangler: Drinking Habits in the GDR,” said local products with a story appealed to this new generation of gourmands.

“A bottle is just a bottle,” said Kochan. “But when I explain who produced the spirits, where the distillery is situated, and what the history of the distilleries is … then people are happier. It is easier for customers to make a choice.”

That’s why Kochan only stocks small production liquors. Those looking for Jägermeister can turn elsewhere. But if you want schnapps handcrafted by monks or nuns, then Kochan is ready. He even sells herbal schnapps made just a few streets away.

Gabriel Grote and his partner Hennig Birkenhager are as intoxicated by the future of schnapps as Kochan. These young entrepreneurs are sound engineers by day and schnapps-makers by night. Grote uses a recipe of his father’s from the 1950s to make a herbal liquor called “Pijokel 55.”

Grote and his partner wear white lab coats and hair nets as they mix the concoction and fill bottles in a small kitchen next to their office. Pijokel 55 contains vanilla, cardamom, and about ten other spices.

The bottles are not cheap at €30 each, but Grote says the customer they are targeting understands the idea of paying more for quality.

“The customer is maybe around 30 to 40 and has a good job,” said Grote. “He wants to taste and try other products. Not the normal stuff.”

He said he thought the market for spirits was changing to mirror the rise in popularity for gourmet foods.

“People prefer products which are not usual like a McDonalds fast food thing. That’s why I think these products – gourmet products – are more interesting for the future and that is why we do this.”

A chance encounter on the Austrian ski slopes gave birth to another new entrant to the Berlin schnapps scene.

Gerald Schroff was the hotel bar manager where Ulf Stahl, a professor at Berlin’s Technical University’s Institute for Biotechnology, was staying. They met on the ski slopes and later at the bar – Schroff serving and Stahl drinking.

They discovered a common love for gin and now run Preussische Spirituosen Manufaktur (PSM) from a building in the northern district of Wedding that has housed liquor production since the late nineteenth century.

They make 35 different products including an elderflower liqueur, pear brandy and gin. The producers sell around 2,000 bottles a year – all of which are produced on site.

The inside of the factory is a steam punk’s dream. Brass stills dominated, while dark wooden shelves in the main room are home to lines of glass bottles containing ingredients.

Schroff walked quickly through the factory, lifting covers off metal stills and describing how each ingredient is derived. He opened a room with barrels filled with spices like ginger and clove.

“We like the fact that our bottles don’t have a bar code to be sold at a grocery store,” said Schroff.

“People don’t want to drive 20 kilometres to the shopping centre. They want to taste it and talk about it with us.”

Thomas Kochan, the owner of the spirits shop, said in the world of liquors size mattered – and smaller was better.

“Many Germans like to drink liters of liters of beer, but that is not my cup of tea,” said Kochan. “I simply like to have a small glass of something very delicious.”

It’s a big risk to count on those small glasses to account for all of your sales. But these Berlin entrepreneurs believe schnapps’ long history will satisfy customers’ tastes well into the future too.