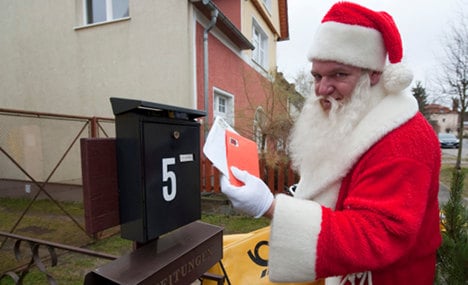 The national postal service has been inviting people to send letters to the Weihnachtsmann since 1984. Seven centres – the largest of which is in the small town of Himmelpfort in Brandenburg – receive the messages and distribute them to volunteers, who answer every letter.

This year the team has answered letters from 86 countries, including Ivory Coast, Uganda and the Cayman Islands, in 17 languages, according to Deutsche Post. It’ll keep sending them out right up to Christmas Eve on December 24.

Postal services around the world from Finland to Canada invite kids to write to Santa, but Germany’s programme is among the largest.

In the run-up to Christmas Himmelpfort gets slammed with 5,000 to 6,000 letters daily. Other locations get bombarded with letters as well. The Cologne office of the operation receives about 150,000 messages per year and Hamburg receives 48,000.

“It’s the nicest time of the year apart from vacation,” said Wolfgang Dipper, who helps run the Hamburg centre.

The letter-writers with the most touching requests even get invited to Himmelpfort to meet Santa himself.

At a special party earlier this month, this year’s young invitees – between 7 and 9 years old – asked Santa for everything from “a cow with bulging eyes” to a unicorn.