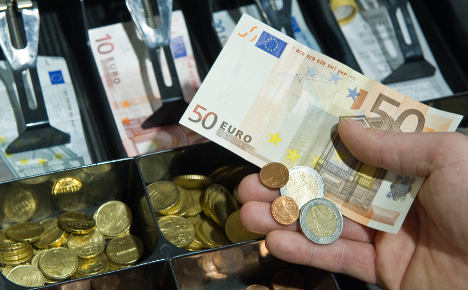 In 2011, Germany had initially planned to raise €302 billion before revising the figure downward to €275 billion, with two-thirds coming from the bond market and one-third from the money market.

The fresh money borrowed will be used to repay the country’s debts and the interest on them, the agency said.

Germany, Europe’s top economy, has more than €2.0 trillion in debt or more than 80 percent of its gross domestic product, resulting in interest charges of tens of billions of euros annually.

It benefits from lower borrowing rates compared to many of its partners in the eurozone, which have been hit hard by sinking investor confidence.

However market volatility has taken its toll. Investors shunned a November auction of German 10-year bonds, considered the gold standard of eurozone debt, in a development that sent shock waves

through the single currency area.

But it had better luck with an issue of two-year treasury notes this month which saw strong demand and brought in more than €4.0 billion.

In its breakdown of government borrowing, the agency said it would continue issuing treasury discount papers or “Bubills” on a six-month basis (€4.0 billion) and a 12-month basis (€3.0 billion) next year.

New federal treasury notes with two-year maturity known as “Schätze” will be auctioned in February, May, August and November, with an outstanding volume for each note set at €15 billion.

Five-year federal notes or “Bobls” will also continue with three new series with a volume of €4.0 billion. Reopenings of the note are planned for February, March and April with a total volume of €15 billion.

Another series will be issued in May and September with a volume of €5.0 billion each.

“Depending on the funding requirements and liquidity situations of the federal government, as well as on the market situation, the amounts and issue dates in the annual preview remain subject to change,” the agency said.

“However the federal government intends to adhere to the announced issuance calendar as far as possible in order to provide market.”