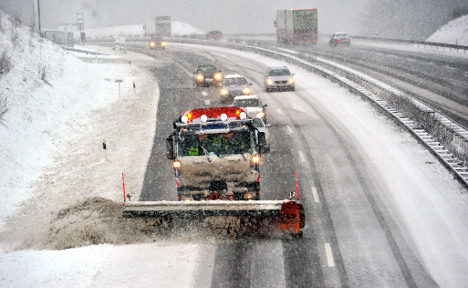 The German Weather Service (DWD) said the wild weather would calm down over the week, with meteorologist Sabine Krüger literally damping down hopes of snow at Christmas, saying it was more likely to be rainy.

The central state of Hessen was one of the worst hit by the snow this week, with more than 40 flights cancelled and many more delayed at Frankfurt-Hahn airport. Earlier in the week several drivers were injured as a truck jack-knifed across the A5 motorway.

Rhineland-Palatinate was also snowy, with one unfortunate truck driver losing over 26,000 litres of sparkling wine when his vehicle was blown over in high winds. In North-Rhine Westphalia a truck got stuck in deep snow on the A4 motorway between Cologne and Olpe.

But the snow will soon be replaced by rain, starting on Tuesday night in the west and north-west, and over the following days in the rest of the country.

There will be a considerable divide in the temperatures on Wednesday, with the east staying at around freezing, while the west will be a warmer two to seven degrees Celsius. There is little wind expected.

By Thursday, the normally snowy south east will be rainy, while the west will have unseasonable highs of 10 degrees Celsius.

As Christmas approaches, the west will have rain with continued mild temperatures of around 10 degrees Celsius, while the east will get scattered showers.

The Alps and the Ore Mountains between south eastern Germany and the Czech Republic, will get considerable snowfall, and some winds in exposed areas will reach gale force.

“Over the Christmas weekend, snow will mostly fall just in areas over 600 metres above sea-level,” said Krüger, meaning that only those in the mountains will be lucky enough to have a white Christmas.