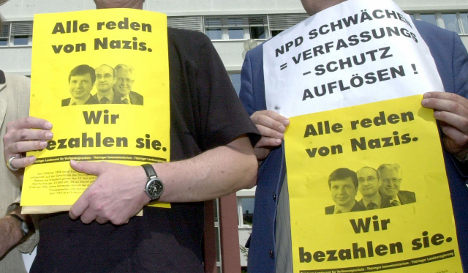 According to the report in the Berliner Zeitung, the domestic intelligence agency of the state of Thuringia kept neo-Nazi leader Tino Brandt informed of the police surveillance he was under.

Brandt had connections with the three murderers Beate Zschäpe, Uwe Mundlos and Uwe Böhnhardt, and the secret service, or Verfassungsschutz, hoped he could lead them to the terrorist cell.

Brandt was one of the agency’s informants in the extremist far-right scene, and was reportedly told that the police were watching him from a rented flat near his home in Rudolstadt. He was also given descriptions of the cars the police were using to follow him.

At one point, the police were even being followed by the Verfassungsschutz, as they were tailing Brandt.

In 2000, the intelligence agency also gave Brandt 2,000 marks for Zschäpe, Mundlos and Böhnhardt to buy new ID cards. According to a report in Sunday’s Bild am Sonntag newspaper, the agents hoped that they would be able to trace the ID cards and so find the trio again, who went underground in 1998.

But the money apparently never reached the cell.

The three, who called themselves the National Socialist Underground, are thought to be responsible for at least 10 murders between 2000 and 2007.

Demonstrators have started to gather outside the headquarters of the Thuringian intelligence agency since their handling of the Zwickau case has come to light.