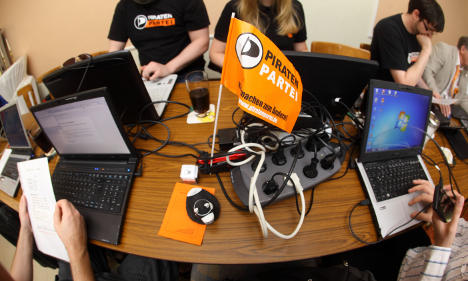 The revelations emerged this week when party member Sebastian Jabbusch published an open letter to draw attention to the escalating problem, which he said had caused “an unbearable climate of fear” to grip the party. Jabbusch said he wrote the letter because “looking away” had to stop.

According to the letter, the unnamed young man – said to be still in high school – has threatened several Pirate Party members, some working in the Berlin state parliament, with the release of compromising photos and videos apparently stolen from their computers by hacking.

Jabbusch warned, “Despite their technological competence, most Pirates are not protecting their computers nearly well enough.”

Jabbusch said the pupil also filmed two people “discreetly having intercourse during a New Year’s Eve party (attended by several Pirates),” and put the video online. He was only persuaded to delete the video after a confrontation.

The young man, whose hacking prowess is much respected in Pirate circles, has so far not responded to the accusations. But they were privately confirmed by at least two of the victims to news magazine Der Spiegel.

The young man’s bizarre campaign appears to be rooted in an incident in the party’s Berlin headquarters in March, when he passed around a picture of his girlfriend naked. He was subsequently barred from the offices. After the couple split up, he threatened to publish other naked photos of her.

Months later, he apologized, promised to delete all other data he had secretly accumulated, and the ban was lifted. But internal resentments have apparently lingered.

The Pirate leadership reacted to the letter with a statement calling on the young man’s victims to press charges against him, since attempts at mediation had failed.

The man has also shown some attempts to disrupt the party’s political plans in Berlin.

He apparently attempted to intimidate Anke Domscheit-Berg, wife of former Wikileaks spokesman Daniel Domscheit-Berg, into not running for a local council seat in the Kreuzberg-Friedrichshain district.

Domscheit-Berg confirmed on Wednesday that she had received a threat that compromising material would be released, but said she would run anyway. She said she has the support of the party leadership.