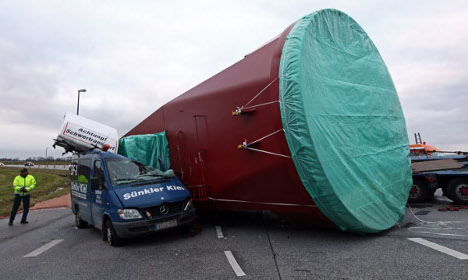 The accident took place at 1:54 am in the Finkenwerder area of the northern German city. The road has now been completely blocked off and an assessment is underway to determine how the incident happened.

“It is possible that the safety straps securing the load in place were not functioning correctly,” a police spokesman from the Hamburg police told The Local.

“Other possible theories we are looking into are tiredness, which may have caused the driver to overshoot a corner.”

The driver of the transporter vehicle was reportedly turning the truck slowly when the flatbed area reared, causing the giant crane foot to slide off onto the road, which suffered massive surface damage.

Click here to see pictures of the fallen crane

The equipment also fell onto the car accompanying it. The driver “was incredibly lucky,” said police spokesman said. “He escaped completely unhurt.”

Clearance of the accident scene is underway, and three cranes are being used to lift the damaged equipment.

The crane foot will be taken by a new truck to the Airbus base, where it will be thoroughly examined before being used again.