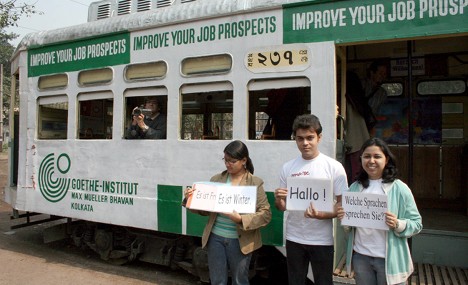 “Everyone is learning German,” said Klaus-Dieter Lehmann, the institute’s president, this week. He said many young people from struggling European countries like Spain or Greece see the language as their ticket to a brighter future.

In eastern Europe and Russia, German is also experiencing a renaissance, Lehmann said. While English will remain world’s key foreign language for the foreseeable future, German comes a close second, he said.

Interest seems particularly strong, however, in lands that are emerging powers like India, a place where the Goethe Institute is focusing on investing resources.

“Beginning next year we are setting up German language departments at 1,000 schools that are offering German until the university level,” Lehmann, speaking of the institute’s cooperation with a government-sponsored education association that could conceivably reach up to one million young Indians in the next few years.

The Goethe institute may have a tough challenge in the coming years. With the European debt crisis looming, funding cuts to many programmes bankrolled by the German government are a distinct possibility.

Also, some countries are encouraging students to focus only on English as a foreign language, to the detriment of other languages.

And although anecdotal evidence suggests interest in German has risen in economically struggling countries, in much of western Europe, fewer people are learning the language, according to European Union statistics.

Between 2005 and 2010, for instance, the percentage of secondary students studying German at Dutch schools dropped from 86 percent to 44 percent. In Denmark the proportion dropped from 50 to 35 percent.