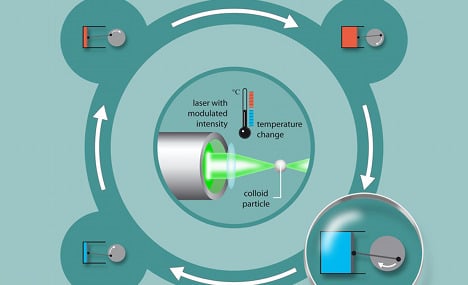 Although the engine sputters incessantly and isn’t developed enough to be used in the real world, the discovery could make it easier to produce ultra-efficient micro-engines in the future, according to researchers at the University of Stuttgart and the Max Planck Institute for Intelligent Systems.

“The machine really does perform work,” said researcher Clemens Bechinger in a statement. “This was not necessarily to be expected, because the machine is so small that its motion is hindered by microscopic processes which are of no consequence in the macroworld.”

To create the engine, the team had to use novel techniques since its not possible to precisely replicate a steam engine on the micro level.

They created a plastic bead that is able to float its water and then used a focused laser beam in the bead to control its motion. They used another laser to heat the water suddenly, mimicking the coal fire of a typical steam engine.

By turning the lasers on and off rapidly, they were able to get the bead to expand and contract rapidly to act as a piston.

The bead is about 10,000 times larger than an atom, so scientists are able to observe its motion with microscopes.

The scientists said they didn’t think the machine would work and were amazed by their invention.

“Our experiments provide us with an initial insight into the energy balance of a heat engine operating in microscopic dimensions. Although our machine does not provide any useful work as yet, there are no thermodynamic obstacles, in principle, which prohibit this in small dimensions,” Bechinger said.