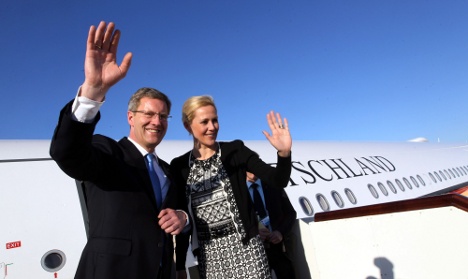 In January 2010 Wulff and his wife Bettina spent a holiday in the villa of German businessman Egon Geerkens in Florida, USA. Afterwards Green party state parliamentarians made an official request asking whether the then state premier had any business relations with Geerkens among other businessmen.

“Between state premier Wulff and the people and companies named in the request there have been no business relations in the past ten years,” Wulff’s official statement to the parliament declared.

According to a report in Tuesday’s Bild newspaper, however, it has emerged that Geerkens’ wife Edith lent the Wulffs half a million euros in October 2008, at an interest rate of four percent.

The Wulffs used the money to buy a house, saving themselves one percentage point on the mortgage they would have had.

Bild also says that shortly after the parliamentary request, Wulff went to the BW Bank in Stuttgart and replaced the private loan with a normal mortgage, although his contract with Edith Geerkens ran until November 2013.

Egon Geerkens is a close friend of the president, and was best man at his first wedding in 1988. The businessman made his fortune in raw materials, scrap metal, old cars, antiques and jewellery.

The president’s spokesman Olaf Glaeseker said on Tuesday that Wulff had answered the parliamentary question “correctly.”

“There are and were no business relations like that,” he said. “There was an agreement with Mrs. Edith Geerkens for a loan from her private fortune. Accordingly the unambiguous question was truthfully answered with ‘no.’ ”