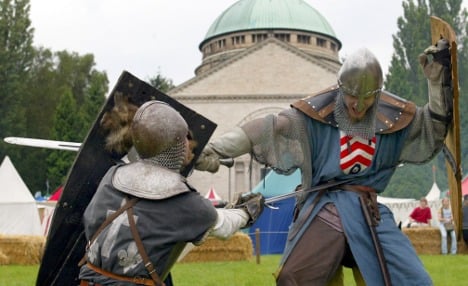 The collection, valued at between €3 and €4 million ($4-5.4 million), goes up for auction in Brussels and includes not only classical armour and weaponry such as shields, helmets and swords, but also crustaceans.

“Man does not have a shell, he had to make one,” collector Karsten Klingbeil, from Berlin, told news agency AFP, of his interest in the art of defence.

“You really can’t move in it because we have a totally different morphology from the period,” he said, explaining that when he was younger he used to try on the armour.

After making his fortune in property in West Berlin, Klingbeil devoted himself from the 1980s to his two passions – collecting and sculpting.

One of the highlights of the antique collection is an ornate piece of armour from the end of the 16th century engraved across its surface with foliage and battle scenes.

Attributed to the northern Italian craftsmen of Pompeo Della Cesa, it is estimated to be worth between €250,000 and €300,000. “This collection is remarkable for its size and its encyclopaedic character,” Philippe Missillier, one of two experts responsible for valuing the objects, said.

Crustaceans, bought or caught throughout the world by Klingbeil himself, will also be part of the sale Tuesday. They have been valued at between €100,000 and €150,000 by the Brussels auction house Pierre Berge & Associes.

These include a Japanese spider crab considered the biggest living crustacean which can reach three metres and in the Klingbeil collection is 1.80 metres (six feet).

“To transport it from Japan to Europe, I had a special container made in which the very fragile legs of the creature could be put on sheets of polystyrene,” he said.

Klingbeil said that although it was heartbreaking to part with his treasures, he wanted his heirs to be able to benefit from the proceeds.