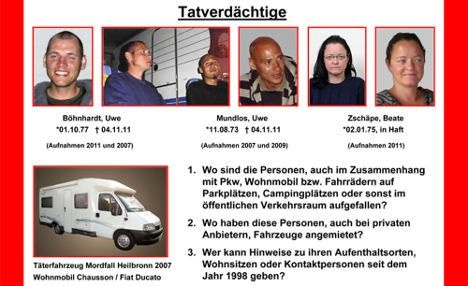 The prosecutor’s office in Karlsruhe has tasked a special investigator with examining links between extremists in Switzerland and the National Socialist Underground (NSU), the German neo-Nazi terrorist group responsible for at least ten murders from 2000 to 2007.

According to the Basler Zeitung newspaper, so far there is no hard evidence that the NSU had a hand in the killing of Rabbi Abraham Grünbaum. But the group is known to have had contact with Swiss extremists and the 2001 shooting coincided with a short burst of deadly NSU activity. Additionally, the methods used in the slaying resembled those favoured by the Zwickau-based German terrorist group.

Though police declined to confirm on the record that they suspected the NSU was involved in the killing, a Zurich police spokesman told the Basler Zeitung they were looking into the matter.

“Whenever similar crimes happen we, of course, examine whether there could be links to unsolved homicides in our jurisdiction,” the spokesman said.

The Israeli orthodox rabbi was shot twice in the upper part of his body on June 7, 2001 from a range of less than two metres. At the time it was suspected that anti-Semitism could have been a motive but that could never be proven. However, nothing was stolen from the rabbi. Police briefly detained one man on suspicion of committing the killing, but he was released without charges.

That summer also saw similar killings by the terrorist cell of three Turks: a tailor in Nuremberg, a fruit seller in Hamburg and the owner of a small business in Munich.

The terrorists also met with like-minded people in several cantons in the German-speaking part of Switzerland, the Basler Zeitung reported.

Witnesses reported they drove a vehicle with Swiss number plates during their travels across northern Germany. Additionally, the weapon they allegedly used to kill eight Turks and one Greek over the course of the last decade, a Ceska 83, was purchased in canton Solothurn in Switzerland, the newspaper said.