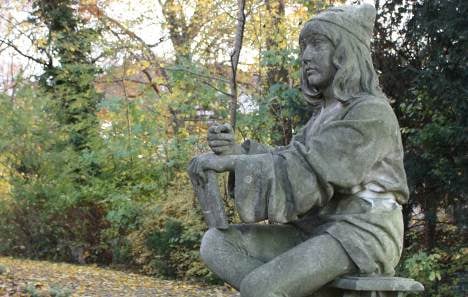 The statue of the young Dürer sitting on a stool with one leg folded into the other, book in hand was in the garden for decades, while bureaucrats included it in lists of art thought missing after the war.

Visiting art historian and Dürer expert Jeffrey Chipps Smith of the University of Texas identified the statue as that made in the 1870s by the artist Friedrich Salomon Beer, called simply “Albrecht Dürer as a boy.”

A release from the Academy said the statue was bought in 1887 by the German National Gallery. In 1940 the sculpture was loaned to the Nazi Economy Ministry, and placed in the garden of Hitler’s economy minister at his flat in Wannsee on the outskirts of Berlin.

It remained there during the final days of the Third Reich, and was left untouched as the economy minister’s flat was turned into part of the American Academy.

The statue was missed after the end of the war and was entered into the national Lost Art data bank as well as other lists of missing art.

Now re-discovered, the statue will be removed from the garden on Friday for extensive restoration work.

Once restored to gleaming marble, the statue will be taken to Nuremberg, Dürer’s birth city, to be part of the exhibition on Dürer’s early years at the Germanic National Museum there – from May until September 2012.

After that, the statue, which still belongs to the National Gallery, will be returned to Berlin, although it has not been announced whether it will go back to the American Academy garden.