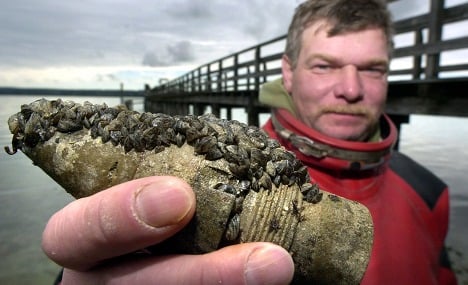 A government-sponsored working group produced the new report “Contaminated Munitions Sites in the Ocean,” which identified dozens of sites where large numbers of dangerous items, mostly from the World War II era, have been dumped. It said the problem is most severe in the North Sea, where at least 1.3 million tonnes of conventional and chemical munitions are at the bottom of the sea.

Officials warned that the full extent of the problem is unclear, particularly in the Baltic Sea, because many large munitions dumps have yet to be identified.

“Up to now, only a small portion of the affected areas are known,” said Tobias Knobloch of the Federal Maritime and Hydrographic Agency, adding that even documents showing where munitions might be located have large gaps in them.

In some cases, particularly in waters off Mecklenburg-Western Pomerania, data and facts on dumping were apparently never even written down.

And the old munitions can hurt people whose livelihood is made on the seas, Knobloch said.

“A risk can arise, for example for fisherman, if their nets come in contact with ammunition. Or through construction projects, such as the laying of a pipeline,” Knobloch said.

Chemical leakage can also occur, causing injuries and accidents. Leaks from white phosphorous incendiary bombs can wash up on shore and cause severe burns.

There are no easily solutions to dealing with the weapons problems, according to officials and the report. But it is hoped that raising awareness of the problem could pave the way for coordination between countries and new techniques to retrieve and dispose of old munitions.