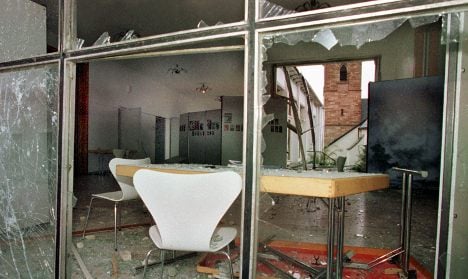 The Frankfurter Allgemeine Zeitung reported on Saturday that the neo-Nazi terror group from Zwickau could have carried out the 1999 bomb attack in Saarbrücken on an exhibition on war crimes committed by the German army during World War II.

It may also be behind a series of arson attacks in the town of Völklingen that only ended in September 2011, the paper suggested.

According to information obtained by the newspaper, a Turkish organization in Völklingen received a copy of a DVD which the group produced, claiming responsibility for the murders of nine men with migrant backgrounds between 2000 and 2006.

The group, calling themselves the National Socialist Underground (NSU), are alleged to have killed eight Turks and one Greek man in a killing spree across the country, as well as a policewoman in 2007. The crimes were only linked to them when police found the weapons used in the shootings and the DVDs boasting of the murders, following the deaths of two of the gang.

Uwe Mundlos and Uwe Böhnhardt died – one shooting the other and then himself – following a botched bank robbery on November 4. Their alleged accomplice Beate Zschäpe, is alleged to have sent DVDs to various media outlets and organizations that day before blowing up the flat in Zwickau that the trio shared.

She then she turned herself into the police and has since been charged with arson and membership of a terrorist organization. Three men suspected of supporting the group have since been arrested.

Now investigators are looking again at the series of 10 arson attacks carried out in Völklingen between 2006 and September 2011 to see if they were carried out by the group. The attacks, in which 20 people were injured, were aimed at buildings which housed Turkish immigrants, as well as Arabs and sub-Saharan Africans. The orginal investigations were suspended and the police said at the time that they did not suspect any xenophobic motives.

Saarland is one of Germany’s smallest states, bordering France and Luxembourg. Völklingen, a town of 40,000 inhabitants, is a stronghold for the far-right National Democratic Party (NPD), which has seats on the city council. Other far-right groups, known as Kameradschaften, are also active in the town.

One of the Turkish victims of the arson attacks has accused the authorities of conducting a one-sided investigation. The cases will now be reopened and possible misconduct on the part of the police will also be examined.

Saarland’s chief prosecutor Ralf-Dieter Sahm told the FAZ that “a far-right background cannot be excluded, rather it is probable.” He said that the investigation would also probably involve asking the domestic intelligence agency “one or two questions.”

The FAZ also reported that the authorities received a threatening letter after the bomb attack on the Wehrmacht exhibition in 1999, which included phrases which indicated that the writer was from the former East Germany.

The exhibition, which travelled to many towns and cities across Germany and Austria, showed how ordinary German soldiers took part in the murder of Jews during World War II. It was deeply unpopular with neo-Nazis, who staged protest marches in various cities. The exhibition sparked a deep debate about the crimes of Nazi Germany and the way Germany had dealt with its past.